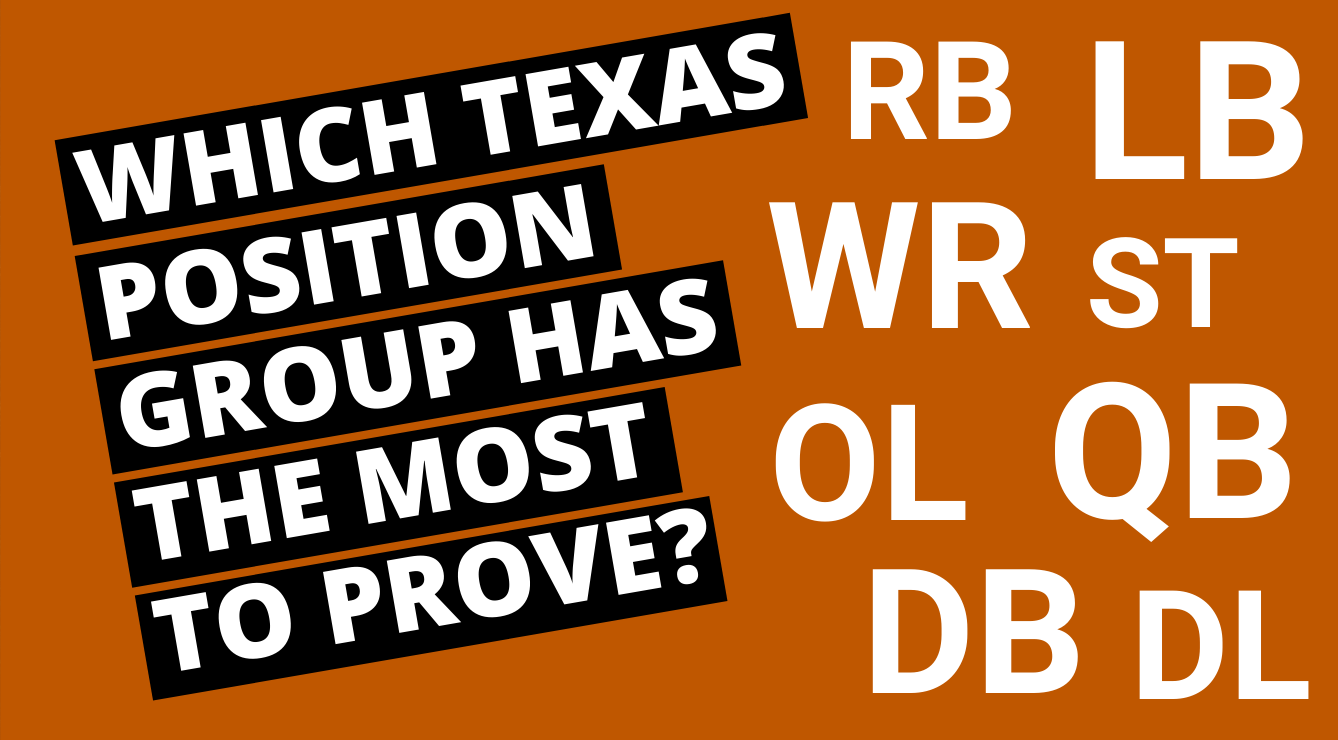 The 2020 Texas Longhorns don’t lose many seniors, and return 16 starters from last season.

With spring football practices starting March 24, fans are still looking for several players and position groups to step up. The writers and editors at Horns 24/7 pick their position groups with the most to prove this spring.

Here are their picks and what I think about each. Comment below with your thoughts.

You win up front, so, without a doubt, the two new starters on the right side of the offensive line are going to have the most to prove when spring football starts on March 24.

FYI … I’m hearing good things about the performance in winter conditioning by Okafor, a fifth-year senior in the fall who could end up at right tackle or right guard.

MY TAKE: I’ve never been a Chip Brown fan, but I 100% agree with him that the game starts at the line of scrimmage. The offense goes as the offensive line goes.

Losing Shack (a team captain last season) at center is big, and may even affect Sam Ehlinger more than we realize. It would be cool to see Okafor finally perform up to his potential.

Still, I wouldn’t say the O-line has the most to prove of any group. However, we saw them regress in the second part of last season before finishing strong in the Alamo Bowl. So, this group needs to prove it can be consistent.

The group that has the most to prove is without a doubt the linebackers, in my opinion. Much of the struggles Texas faced on defense last season started with the defensive front’s inability to get quality pressure on QBs and a lack of experienced talent, and quite frankly, play makers at linebacker. Both of those issues led to the secondary, particularly corners, being put on an island many times. That’s a recipe for disaster for a defense that featured new starters in several key roles and being in a league like the Big 12, which features some of the best wide receivers in college football. New linebackers coach Coleman Hutzler has his work cut out for him to not only break in some new faces at LB, including former safety DeMarvion Overshown, but also finding the best guys to fit the new defensive scheme limited numbers working in his favor.

MY TAKE: Great points by Taylor. The linebacker group may be the thinest on the team with the biggest question marks. I think this group was hurt by Todd Orlando’s philosophy last season.

Still, Joseph Ossai is the best player on the defense, leading the team in tackles last season. He’s also proven to be a leader. Hopefully the changes on defense will allow him to roam around and blow up backfields.

Moving DeMarvion Overshown to OLB is intriguing and should add speed to the group. Juwan Mitchell deciding NOT to transfer is huge for depth. He’s a disruptive blitzer but needs to improve in recognizing plays and maintaining the middle zone.

I’ll say wide receiver considering Texas has to replace some bona fide studs in Collin Johnson and Devin Duvernay. There are numbers and talent at the position, but most of it is unproven up until this point.

MY TAKE: The receiver group is young and definitely a concern. You’d love for your senior QB to have more experienced receivers to throw to. You also can’t downplay the loss of two senior team captains at the position. Leadership among individual positions is so huge.

Brennan Eagles and Jake Smith combined for nearly 800 yards and 12 TDs last season. Moving Jordan Whittington to the slot along with Jake was the origional plan anyway. But I would expect new offensive cordinator Mike Yurcich to draw up creative ways to get Whittington the ball. Joshua Moore returning adds depth and more experience, even though he doesn’t have a ton of game snaps.

What the WR group needs most is a true #1 target and leader. That SHOULD be Eagles. No doubt, this group is overflowing with talent and potential. It just needs to produce.

This is a big spring for the future of the defensive line. In moving back to a four-man front, there will be more room for guys to move up the depth chart, and with those open spots will come more experience, but after a season with just 10.5 sacks on the defensive line, multiple guys will need to step up in a big way.

MY TAKE: I don’t think the defensive line has the most to prove of any position, but I do think it’s up to this group to make the biggest overall impact on defense. Keondre Coburn was awesome as a true freshman at nose tackle. With a new four-man front it will be interesting to see how he will be freed up to move around more to use his athleticism.

Ta’quon Graham quietly had 10.5 tackles for loss last (half of his total tackles) season as a junior. If he improves even more in his senior season, he and Coburn could be a terrific combo.

Colt McCoy Selfishly Kept Himself Out of the 2009 Title Game? Debunking the Conspiracy!