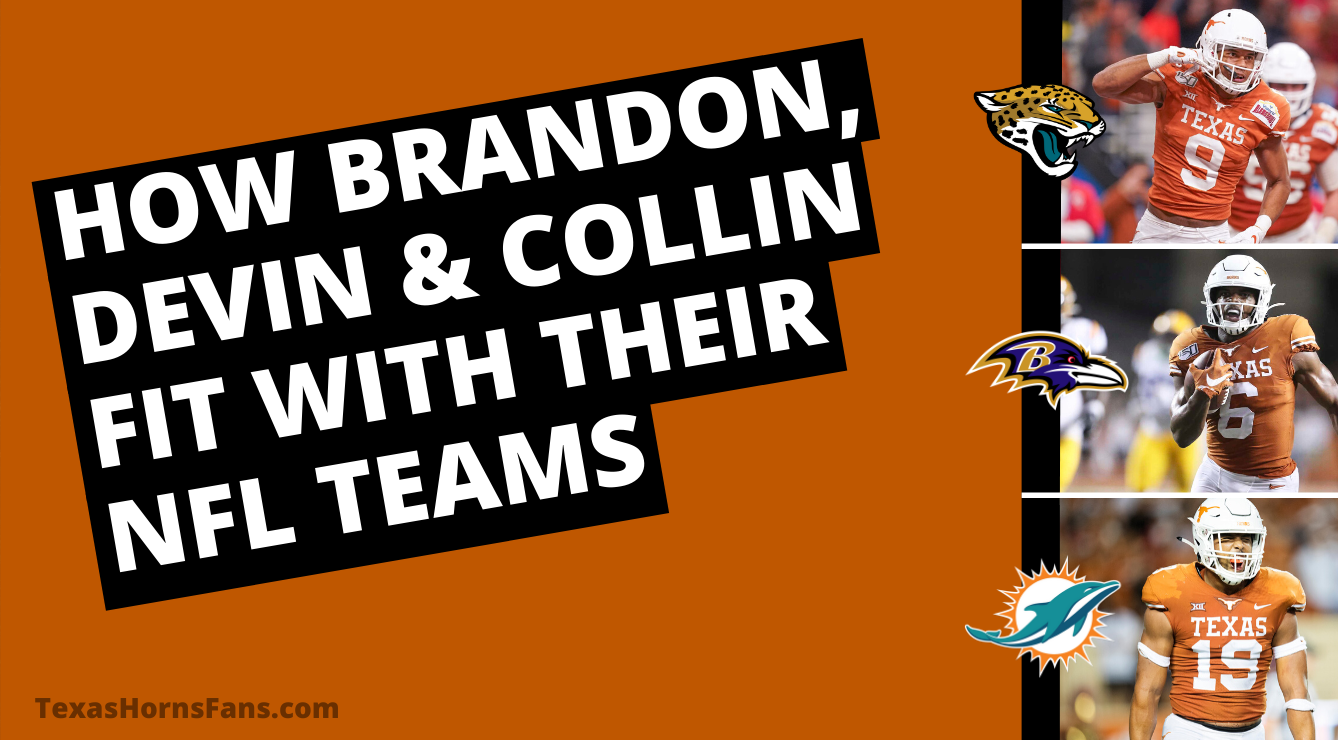 Safety Brandon Jones, and receivers Devin Duvernay and Collin Johnson have new homes in the NFL.

Here’s how each should fit with their pro teams and what to expect in their rookie seasons.

(Be sure to scroll down for the Facebook Live chat with Steven Ngati of Fanatic Perspective!)

Brandon Jones was the first Longhorn off the board at pick #70 to the Dolphins.

Miami traded defensive back Minkah Fitzpatrick to the Steelers last year. He had an All-Pro season.

Defensive back is a soft spot for the Miami defense, allowing more passing touchdowns than any other team in 2019.

Brandon instantly brings experience, versatility and leadership to a defense lacking all three. He can play corner or free safety depending on the offensive matchup.

Welcome to the squad @BlessedJones33!

Catching passes from the NFL MVP on the best team during the regular season last year… you can’t wish for much more.

The Ravens are not a pass-focused offense. Thy ranked dead last in pass attempts in 2019.

They also added Ohio State running back J.K. Dobbins, who was a ridiculous steal late in the second round. That move shows how committed they are to the run game.

So, where does Dev fit? Well, he joins two receivers drafted last season. Marquise Brown was the #1 receiver selected in the 2019 draft. He totaled 584 yards and seven touchdowns. Myles Boykin had just 13 catches.

There’s room for a receiver to step up and produce. Devin could be lethal in the slot for an offense build to maximize QB Lamar Jackson’s natural talent to keep defenses guessing.

He could use a reliable pass catcher wish sure hand and the ability to exploit open spots in zone defenses. We might even see Dev line up in the backfield.

I don’t see any Ravens receiver consistently getting 1,000-plus yards per season over the next few years considering how they run their offense. But that doesn’t mean Dev can’t be a significant weapon on one of the NFL’s best teams.

"He's someone who can ALWAYS come up with the big play."

Tune into the #NFLDraft on ESPN, NFL Network and ABC. pic.twitter.com/FuMjrNDMjD

Collin Johnson fell to the 20th pick of the fifth round, and was the second receiver drafted by the Jaguars, who picked up Colorado’s Laviska Shenault in the second round.

The Jaguars were not good last year, finishing 6-10 and last in the AFC South.

But they have talented, young offensive players, including a surprise emerging quarterback in Gardner Minshew.

DJ Chark was a Pro Bowl receiver last season with more than 1,000 yards and eight TDs. Chris Conley and Dede Westbrook each totaled more than 600 yards. Leonard Fournette is a legit receiving threat at running back with more than 500 yards.

So, the offense was able to spread the ball around, which is pretty rare for a rookie quarterback.

Collin will be the team’s tallest receiver, and likely will be used in red zone situations to out-body smaller defensive backs. I wouldn’t even be surprised if he lines up some at tight end.

I don’t see him getting many chances this season unless injuries begin hitting the receivers. Fellow rookie Shenault is not a small receiver, but he also didn’t rack up a lot of yards or touchdowns in college.

Texas Longhorns LEVERAGE program will be a recruiting game-changer