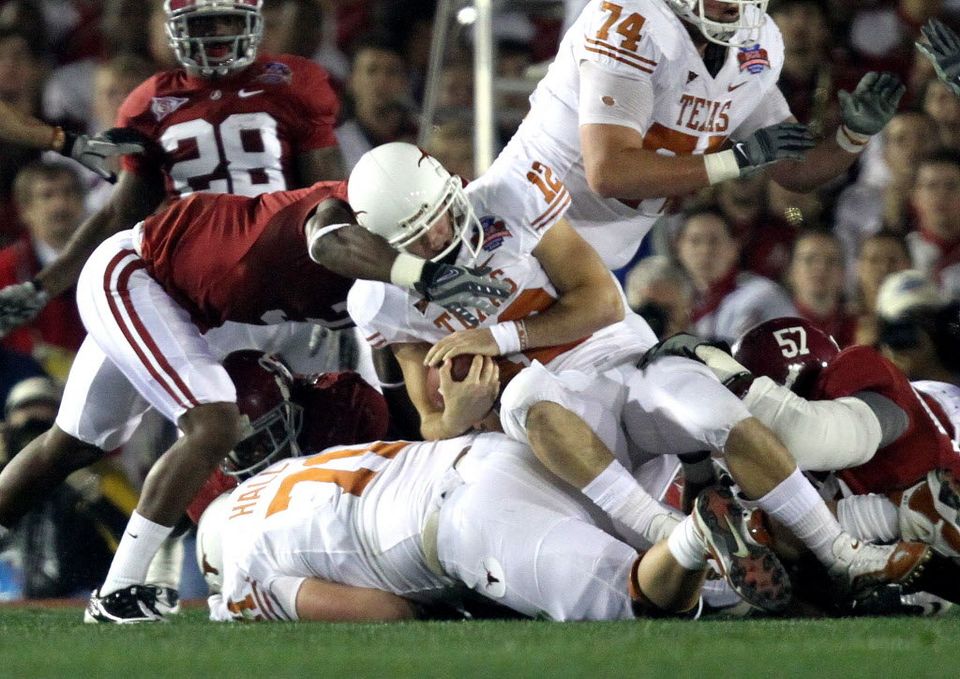 No, Colt McCoy did not keep himself out of the 2009 National Championship Game against Alabama to help preserve his NFL Draft stock.

That conspiracy has hung around for more than 10 years, and it’s time to debunk it for good.

First, let’s look at the hit, which Texas fans know all too well.

With 11:29 left in the first quarter on Texas’ first drive, the Longhorns had a first-and-10 from the 11-yard line. Colt took the snap and on a QB zone run play to the left.

As soon as he reached the line of scrimmage, Alabama defensive tackle Marcell Dareus popped Colt’s right shoulder with his helmet. Colt stood up and shook his right arm.

It was his last play at a Texas Longhorn.

Here’s a video of the play:

“But for one reason or another, this tackle was different. This hit would change my whole life. I remember immediately after the collision my only thought was, ‘What just happened?’ I didn’t have any pain in my right arm. I didn’t have any feeling at all. It was just entirely numb.”

That was Colt McCoy’s recollection posted in a Player’s Tribune article. Although he wasn’t in pain, he had no feeling or control over his arm.

The hit arguably altered the course of Texas Longhorns football for more than a decade.

Colt was unable to return for the rest of the game, and Texas was forced to throw in true freshman Garrett Gilbert. Texas lost 37-21 even though the game was close until the fourth quarter.

Also, I was at the game with my dad – 45-yard line on row 20, Texas side. We watched Colt on the sideline clearly having no control over his arm, which moved like a wet noodle.

Here are a couple pictures I took from our view. 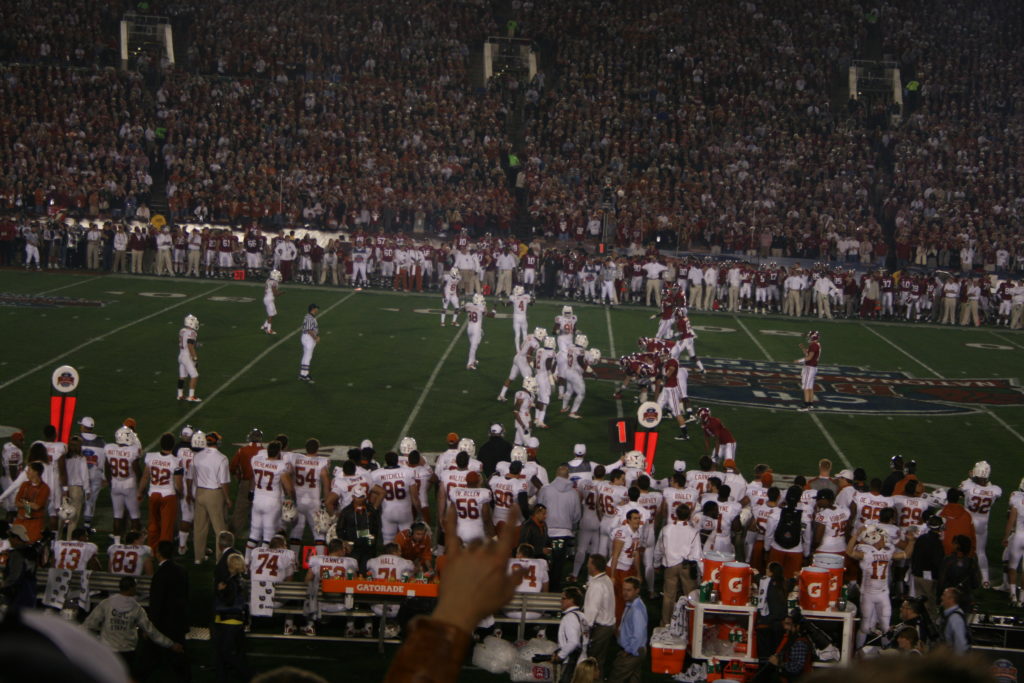 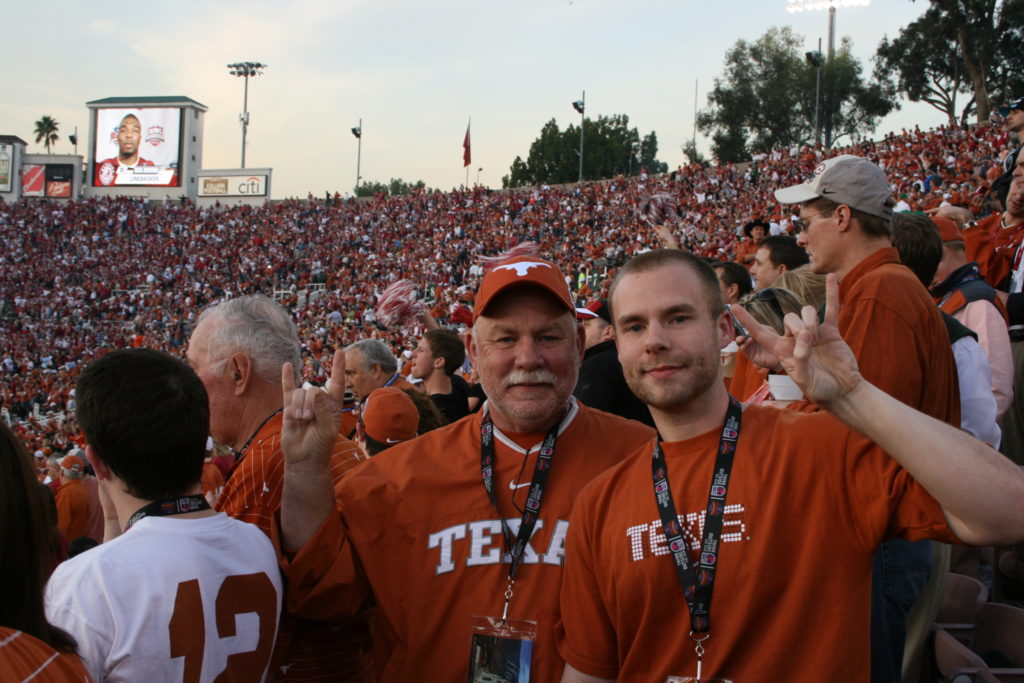 Back to the Conspiracy...

The claim by some Longhorns “fans” goes something like this: Colt McCoy could have continued playing but purposefully held himself out in order to not damage his NFL draft stock.

Another theory says Colt’s dad convinced him to stay on the sideline.

So, here are five main reasons why that’s insane.

1. This wasn’t the first or last time Colt dealt with a nerve issue in his shoulder and neck.

As a freshman in 2006 against Kansas State, Colt was reaching for the endzone on the opening drive when a helmet-to-helmet hit snapped his head back.

It resulted in a pinched nerve in his right shoulder, which caused him to miss the rest of the game. He tried to come back two weeks later against Texas A&M, but clearly was not healed. He threw three interceptions in the game, which kept Texas out of the Big 12 Championship Game.

In December 2014 with the Washington Redskins, Colt injured his neck and shoulder—again on the right side and again a nerve issue. He was placed on injured reserve.

“I got stood up by someone in the hole and I tried to fall backwards, and I must’ve got jarred in the back of my neck—kind of whiplashed again,” he said in the press conference after the game.

Have you ever had a nerve issue, especially in your shoulder or arm area? I have, and it’s an incredibly weird feeling.

Numbness, loss of control, shooting/sharp pains. Imagine having to throw a football 30 to 40 times against the best defense in the nation.

And, it wasn’t an issue of “playing through the pain” as some fans claim. It has nothing to do with toughness or pain.

2. Colt was never going to be a high NFL Draft pick anyway.

To say that Colt was trying to preserve his draft stock indicates a lack of understanding of the NFL Draft and his draft projections even before the injury.

He was projected to be a late-second-round or third-round pick at best. He ended up being the 21st pick in the third round.

He signed a four-year deal with the Cleveland Browns worth up to $5 million. Had he fallen to the fourth round, the deal wouldn’t have been much different.

It’s no like he was projected to be a first-round pick and didn’t want to risk falling the third or fourth round because of an injury.

Claiming that Colt purposely and selfishly held himself out is to claim that he could have lost something by continuing to play.

Sitting out during the most important game of his life actually sends a signal that something major is wrong. Why would he want to project that he’s so badly injured that he can’t continue to play in the biggest game of his life?

Let’s say he does go back into the game for a couple series and just can’t throw the ball. He then has to come out and miss the rest of the game.

At that point, he’s in the exact same boat.

4. Colt had more to gain from playing in the game and winning the title.

Winning a national title against Alabama arguably has more long-term value than trying to maintain a third-round draft selection.

Like other Longhorns legends, Colt McCoy can hang around Austin for the rest of his life just being Colt McCoy.

Sure, Colt has been a backup QB for nearly his entire NFL career, but he’s done it for 10 years and lasted longer than any other quarterback drafted in 2010.

Long-term, he will still be able to leverage his time at Texas much more so than he can his NFL career. He had SO MUCH more to gain by trying to play in the title game, and really nothing to lose as I covered in the last point.

So, if it was simply a matter of choice, it makes so sense why he “chose” to sit out.

This one should be the most obvious to anyone who calls themselves a Longhorns fan.

If Colt selfishly kept himself out of the title game, it would be the first time he had ever done anything like that.

He came to Texas as a three-star recruit from a small school and had to follow in the footsteps of Vince Young.

Colt developed into the winningest college quarterback of all time and the most prolific passer in Longhorns history. He was a leader and a terrific representative of the program.

Is there any other time in his Texas career that Colt gave any indication that he is a selfish player who would jeopardize his team? If so, comment below.

The conspiracy is crazy talk from surface-level fans who have ZERO proof of their claims.

We all know the game would have turned out differently had that hit never happened.

It sucks, but blaming Colt for bailing on his team is just insane.