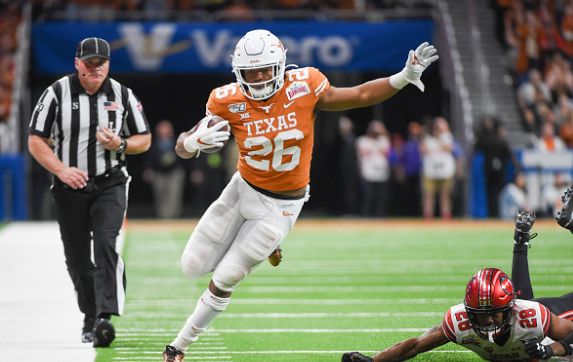 Last season, the Texas Longhorns backfield was decimated with injuries. Texas quickly found itself down to one scholarship running back and moved true freshman quarterback Roschon Johnson to the back-up running back role.

With the arrival of five-star back Bijan Robinson, the 2020 running backs to be one of the most talented and stacked groups on the roster that also includes sophomore Johnson (6-2, 220), junior Keaontay Ingram (6-0, 220), senior Daniel Young (6-0, 220) and redshirt freshman Derrian Brown (5-10, 185). Jordan Whittington will move from running back to the slot receiver position. The problem this year may be how to divide up the number of touches for the group.

Here are the five main story lines for the Longhorns running backs heading into 2020 plus a prediction of the stats each will rack up this season.

Ingram and Johnson are Staying Together

Last year’s one-two punch of Ingram and Johnson is back, as Johnson will remain at RB even though he transitioned last season out of necessity. The duo should get most of the carries. They combined for 319 touches, and more than 1,900 yards rushing and receiving with 18 touchdowns between them in 2019.

Ingram was the top back but hasn’t been at full strength for an entire season. Still, when healthy, has proven to be one of the most effective backs in the country.

Sam Ehlinger’s Impact as a Runner

The Texas ground game still features a heavy dose of quarterback Sam Ehlinger. With 163 carries last season and 164 in 2018, he’s still the team’s leading ball carrier. Even though his designed runs were reduced, Ehlinger was much more effective, increasing his yards-per-carry average from 2.9 in 2018 to 4.1 in 2019.

Even with a deeper backfield, the senior QB is still going to run the ball an average of 10-15 times per game, including scrambles and broken-down passing plays.

Freshman Bijan Robinson Will Have to See the Field

Tom Herman isn’t afraid to play freshmen, even at important positions and in important games. That certainly won’t change with the #1 ranked running back recruit in the country.

Fans, coaches and players will all want to see what impact Bijan Robinson will make. Since he wasn’t an early enrollee participating in spring practices, Robinson could easy into playing time. But as we saw last year, injuries can happen at any time, so he will have to be ready.

The freshman has the most dynamic play-making ability of any runner, but he will have to earn his playing time. Expect to see him on the field in specific situations designed to get him the ball in space.

How Will New OC Mike Yurchich Scheme the Running Game?

Coming to Austin after serving as Ohio State’s passing game coordinator in 2019, you have to wonder how new offensive coordinator Mike Yurcich will design the running attack. With an experienced senior captain at quarterback, things likely won’t shake up too much.

Yurcich also served as Oklahoma Stat’s offensive coordinator from 2013-2018, overseeing running backs such as Justice Hill and Chubba Hubbard—both major components of the overall offense. The Longhorns running backs have proven to be versatile as rushers and pass catchers, so Yurcich has a lot of talent to work with.

Derrian Brown was set to make an immediate impact last season and even compete for the back-up running back job before he suffered a stroke one year ago this month. He has made an incredible recovery after his entire football future was up in the air. He’s expected to be fully ready when fall arrives.

One of the top prospects in the country a year ago, Brown is a smaller back at around 5-10, 185 pounds but plays bigger than his stature. In high school, he was tough to bring down and showed quick acceleration. He likely won’t get enough carries to make a significant impact unless injuries strike once again.