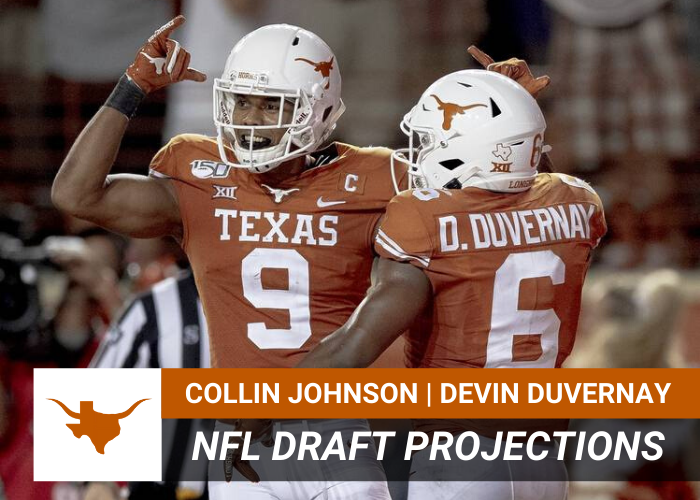 Senior receivers and team captains Collin Johnson and Devin Duvernay have been preparing to realize their dreams of playing in the pros with the NFL Draft approaching April 23. Both participated in the Senior Bowl and NFL Combine.

The Texas Longhorns Pro Day is scheduled for April 1 where the two will have another chance to impress NFL scouts and coaches. This could be the greatest and deepest wide receiver draft class of all time, which also would make it the most competitive.

Here are how Johnson and Duvernay project into the NFL including four possible landing spots for each.

Devin Duvernay was one of the highest-rated receiver prospects in the county coming out of high school. He stepped up to fill the most important role in the Texas passing game last season, finishing third in the country in catches (106) and fifth in yards (1,386).

The last two seasons, Duvernay emerged as one of the most reliable receivers in the country. He certainly helped himself participating in the Senior Bowl, running one of the fastest 40-yard dash times (4.39) and catching everything thrown his way at the NFL Combine.

Like former Longhorns speedster Marquise Goodwin, Duvernay likely will serve as an NFL team’s deep threat and kick returner from time to time.

Duvernay rarely drops a pass and has track star speed… He has proven that he can make diving catches, tiptoe the sideline, and knifes through open zones in a defense… He also runs with a bad attitude and can punish tacklers… He excels at getting up field quickly after the catch.

Duvernay did not have to run precise routes in college, which could hurt him in the NFL… He’s not as fluid as other NFL slot receivers, and moves more like a running back… At 5-10, he’s not ideal size.

Cincinnati Bengals: The Bengals need help everywhere. If they draft Joe Burrow like everyone thinks they will, they could nab Duverney in the fourth or fifth round, even if they draft another receiver this year.

Indianapolis Colts: With the retirement of QB Andrew Luck, the Colts’ top receiver had 607 yards. T.Y. Hilton, who was hurt some last season, will still be the #1 target. But Duvernay could be a good fit as the #3 or #4 receiver.

New England Patriots: Yes, the Patriots need help at receiver. In fact, they need a lot of offensive help. Even if Tom Brady leaves, they still should pick up one or two receivers in the draft.

Buffalo Bills: The Bills are piecing together their receiver group with former castoffs. QB Josh Allen has a terrific deep-ball arm that would be a good fit with Duvernay. They have six picks within the first five rounds, which would be a good spot for one or two receivers.

Have You Checked Out the Legends Link?

Collin Johnson finished his Texas career ranked fifth in all-time school receiving yards. He missed about half the season in 2019 due to a couple injuries, but emerged as a leader and team captain.

At a hair below 6-6, Johnson is a matchup nightmare for a lot of defensive backs. He excels at jump-balls and is terrific along the sidelines.

Johnson is not a #1 NFL receiver, but his size and physical traits along will draw a lot of attention from NFL teams needed a red zone threat and go-to target on third down.

Athletic and rangy, Johnson is a physical specimen. He targets the ball well in the air and times his jumps. He’s a punisher with the ball in his hands and doesn’t try to avoid contact. He doesn’t require precise throws to make the catch. A smart player and natural leader.

Johnson has been dinged up several times in college. He’s not a great route runner and can get caught up with less-skilled defensive backs. Can disappear for long periods of times in games.

Arizona Cardinals: When you draft a QB #1 like the Cardinals did last year with Kyler Murray, you have to get him as much help as possible. Johnson won’t take the place of Larry Fitzgerald when he retires, but he would be a good complement to Christian Kirk and provide Murray a tight end-like outlet on the move.

Dallas Cowboys: Dallas will likely go with a defensive pick early in the draft, but Johnson could be there in rounds three or four to help deepen the receiver group that’s missing a bigger target for Dak Prescott.

Buffalo Bills: The Bills found a solid running back last year in Devin Singletary, so receiver is the next focus for the offense. Leading receiver John Brown will be 30 years old, and Johnson could provide a big target that Josh Allen doesn’t have right now.

Miami Dolphins: Even though Miami traded for quarterback Josh Rosen last year, they are expected to take a QB in the first round. DeVante Parker has turned out to be a solid #1 receiver, but Johnson could be picked to give the team’s future QB more options in the passing game.